The riots in Los Angeles several months ago focused the nation’s attention on social issues surrounding the urban poor. In the wake of these events, pressure to address the needs of the poor through public assistance programs and policies is rising. The issue of welfare affects us at all levels: as individuals, members of our communities, business people, and policy makers. But whether our responses amount to quick fixes or fundamental solutions depends on our appreciation of the systemic nature of the situation.

A recent article in The New York Times touted the ills of the current welfare system in the United States (it was the first of a six-part series of articles beginning on July 6, 1992, entitled “Rethinking Welfare”). The article talked of the “increasing alarm over the persistence of welfare dependency,” and quoted President Bush as vowing to “break this cycle of dependency that destroys dignity and passes down poverty from one generation to the next.”

The welfare system, as described by the article, seems to be a feedback systems issue: an underlying structure, most likely resembling the “Shifting the Burden” or “Addiction” archetypes, containing self-reinforcing cycles that need to be broken (see “Organizational Addictions: Breaking the Habit” in the April 1992 edition of The Systems Thinker for another treatment of addiction). 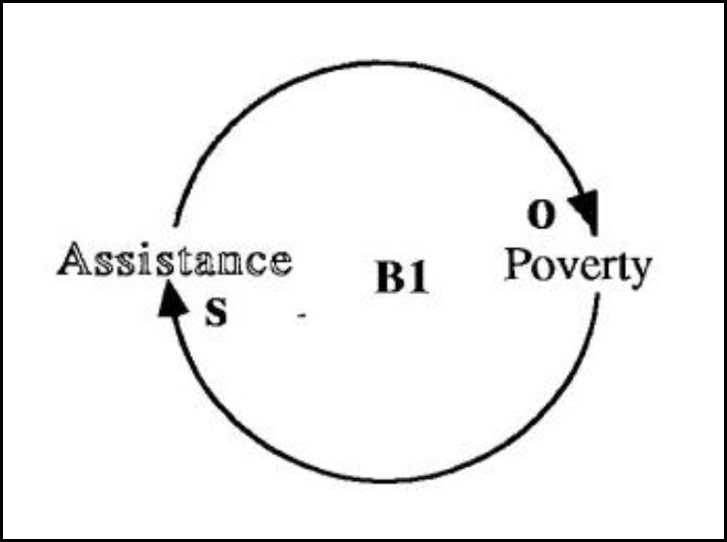 The original rationale for creating welfare programs can be described by a simple balancing loop: assistance decreases poverty, which then decreases the need for assistance.

The Great Society programs of the 1960s grew out of the belief that poverty could effectively be reduced by providing the poor and disadvantaged with economic assistance. Developers of the programs argued that children specifically needed proper support if they were to grow up healthy, educated, and able to live full and productive lives. This was the rationale behind the Aid to Families with Dependent Children (AFDC) program — the primary welfare program in the United States — as well as related programs such as Food Stamps and Medicaid. The structural basis for this argument traces out a simple balancing loop: assistance decreases poverty, which then decreases the need for further assistance (see “Welfare Rationale”).

Welfare grew dramatically in the decades that followed, from approximately 3 million children in 1961 to nearly 12 million children in the mid-1970s, while the amount of payments in real dollars quadrupled. This growth in welfare soon became known as the welfare crisis, as evidence showed that poverty, particularly urban poverty, had gotten worse over the years instead of better. The welfare programs have been criticized as primary contributors to this entrenchment of poverty.

The underlying causes are thought to be as follows. First, since people receiving welfare do not have the same economic pressure to work as before welfare, their self-reliance erodes. This erosion of self-reliance further reinforces their poverty. Second, welfare affects social institutions, both governmental and cultural, in a manner that encourages poverty and rewards people for not working and not saving (welfare recipients are actually penalized for saving beyond a certain level). Although the evidence is somewhat controversial, it is also thought that welfare provides incentives for poor families to become larger than they otherwise would by encouraging unwed mothers to remain unwed and have greater numbers of children in order to receive more benefits. These additional effects also decrease self-reliance and increase poverty.

The “Welfare Addiction” diagram displays these relationships: decreases in poverty from assistance causes decreased self-reliance; this effect is delayed over time because cultural changes usually take about a generation to have an impact. The decreased self-reliance then results in increased poverty. In addition, increased assistance result in poverty rewards, such as disincentives to work or save money. These rewards again take time to be fully absorbed into the culture, but when they do, they further decrease self-reliance and eventually increase poverty.

The result is a case of dependency, where society has adapted to economic assistance and eventually comes to rely upon it. Self-reliance atrophies and the burden of economic support shifts to external assistance. This leads us to where we are today, with a sector of society well entrenched in poverty and a large and costly welfare program.

A number of proposals are currently being developed to address welfare issues, and they are sure to be hotly debated in the coming months of this election year. From a systems viewpoint, how should we think about them?

One policy that is being taken seriously (and has been implemented on a small scale in a number of states over the last few years) is to reduce welfare programs outright. This could potentially plunge the system into withdrawal. In the short run, poverty would increase for those who depend upon assistance, and costs to the public would decrease. Over the long term, society should adapt and become more self-reliant. However, self-reliance is a skill that is easier lost than learned, so existing poverty may remain entrenched for quite some time after welfare programs are scaled down. Also, the side-effects of withdrawal, as with any addiction, could be devastating or overwhelming. Urban unrest and riots are likely withdrawal symptoms that could cause much pain and suffering. Just as heroin addicts can use methadone to negotiate their transition from addiction, perhaps welfare-addicted societies need something similar — a welfare equivalent to the popular “nicotine patch.”

Another proposal consists of supplementary aid to cities. For example, several billion dollars have recently been authorized by Congress to fund jobs for inner-city youth. Though it sounds promising, supplementary aid is the equivalent of a quick fix for an addicted society. It is politically expedient because it relieves a short-term need, but it does not address the fundamental issue of welfare dependence and its long-term impact on poverty. Rather, it will reduce the symptoms of poverty temporarily, thereby alleviating the discomfort generated by some of the recent cutbacks of welfare and the economic downturn in general.

A third proposal is workfare and job training. Under these programs, people would be eligible for assistance, but only for a short time unless they found a job, performed community service, or entered into a training program. This proposal has much merit — it eases the pain of welfare withdrawal while it requires and encourages people to work, thereby developing their self-reliance. In other words, it alters the structure of the system (loop B4 in “Welfare Addiction”).

Unfortunately, effective job training programs are costly and their results are not seen immediately. Therefore, they can be very hard to justify politically, especially during bad economic times. The New York Times describes such policies as “new attempts to change the behavior of the poor with carrots and with sticks.” If such efforts are implemented with long-term commitment, they stand to make a difference. But if they are done halfheartedly, they are apt to prove ineffective, lose their credibility, and become difficult to support. Although assistance decreases poverty (81), it also erodes self-reliance, which results in increased poverty over time (B2). Increases in assistance also increase poverty rewards, which further decrease self-reliance (R3). The result is an ‘Addiction” archetype that makes it difficult to break out of the welfare cycle. Properly implemented workfare and job training programs could increase self-reliance (B4) and break the cycle.

Implications for the Future

Admittedly, the above discussion is not an exhaustive analysis of welfare and somewhat oversimplifies the issues. Since approximately 75% of welfare recipients are African-American, many people regard welfare as a cultural issue. Others point out that the welfare budget is but a small fraction of the defense budget, and so in this larger context should not be viewed as a fiscal crisis at all. Lastly, many people assert that the rapid growth in welfare did not cause substantial increases in poverty. They claim that the poverty was there all along and was merely acknowledged as welfare programs came into their own.

Regardless, the central issue is one of self-reliance and self-responsibility versus addiction and dependence. This is not intended to reduce the welfare issue to a plug for rugged American individualism, but to point out that our society’s approach to welfare has become destructive and self-defeating. The mental models of linear cause-and-effect that policy makers had when they designed our existing welfare programs still abound. Therefore, much of the proposed legislation stands a good chance of being implemented from the same worldview that gave rise to the welfare crisis in the first place. The predictable solutions will alleviate the side-effects of dependency in the short-term, but will not address the fundamental dynamics of the system, particularly over extended periods of time.

An appreciation for the systemic structures that underlie welfare dependency could change this — shifting the focus to creating and increasing self-reliance and economic independence. In our various roles we will make choices as to how to participate in this, whether by being involved in a job-training program at work, volunteering at a shelter, or endorsing and voting for elected officials. We should let our insight into the structure of the addictive process guide our actions — realizing that it will take time, will almost certainly be uncomfortable, and in this age of the ten-second sound-bite, will require enduring commitment.

David Daniels is currently a manager at a large financial institution in New York City. He studied at the System Dynamics Group at MIT, where he did Master’s work on the dynamics of welfare and the AFDC program.