When Albert Einstein began to play with the theory of quantum physics, he didn’t like it. He spent a few years trying to disprove it, because it didn’t make sense to him. But in the end, Newtonian physics couldn’t answer Einstein’s questions. His only choice was to become a quantum thinker. This didn’t mean that he rejected Newtonian physics entirely; it simply meant that there were many occasions when he had to use a quantum rather than a Newtonian approach.

So many of the interventions we design focus on addressing symptoms rather than underlying problems. Use the clues in “Is It a Problem or a Symptom?” to determine whether your actions are merely bandaids or are likely to have a lasting, positive impact.

However, our world is made of many complex relationships and interrelationships. Systems thinking provides a perspective that, most of the time, various components affect each other in various, and often unexpected, ways. So, for example, the use of the pesticide DDT to kill mosquitoes led to a number of unanticipated side effects. These included the decimation of several species of mosquito-eating birds and the rise of DDT resistant mosquitoes. Over time in some places, this dynamic made the mosquito problem worse (see “Unintended Consequences of DDT”). In organizations, systems thinking brings powerful tools and enlightened perspectives to organizational diagnosis, problem solving, strategy, and leadership (see “Linear vs. Systems Thinking”). The Road to Becoming a Systems Thinker

Adopting a systems approach takes persistence and curiosity. Being the sole systems thinker in a linear thinking organization can be a lonely place. People will not understand you. You’ll feel like you’re walking around with two heads… whenever you talk, people will stare at you, confused.

Of course, many people have thought systemically all their lives. Many of them don’t even know that what they are doing is labeled “systems.” But for the vast majority of us, the jump to systems thinking requires time, practice, curiosity, and intentionality (see “Making the Shift”). 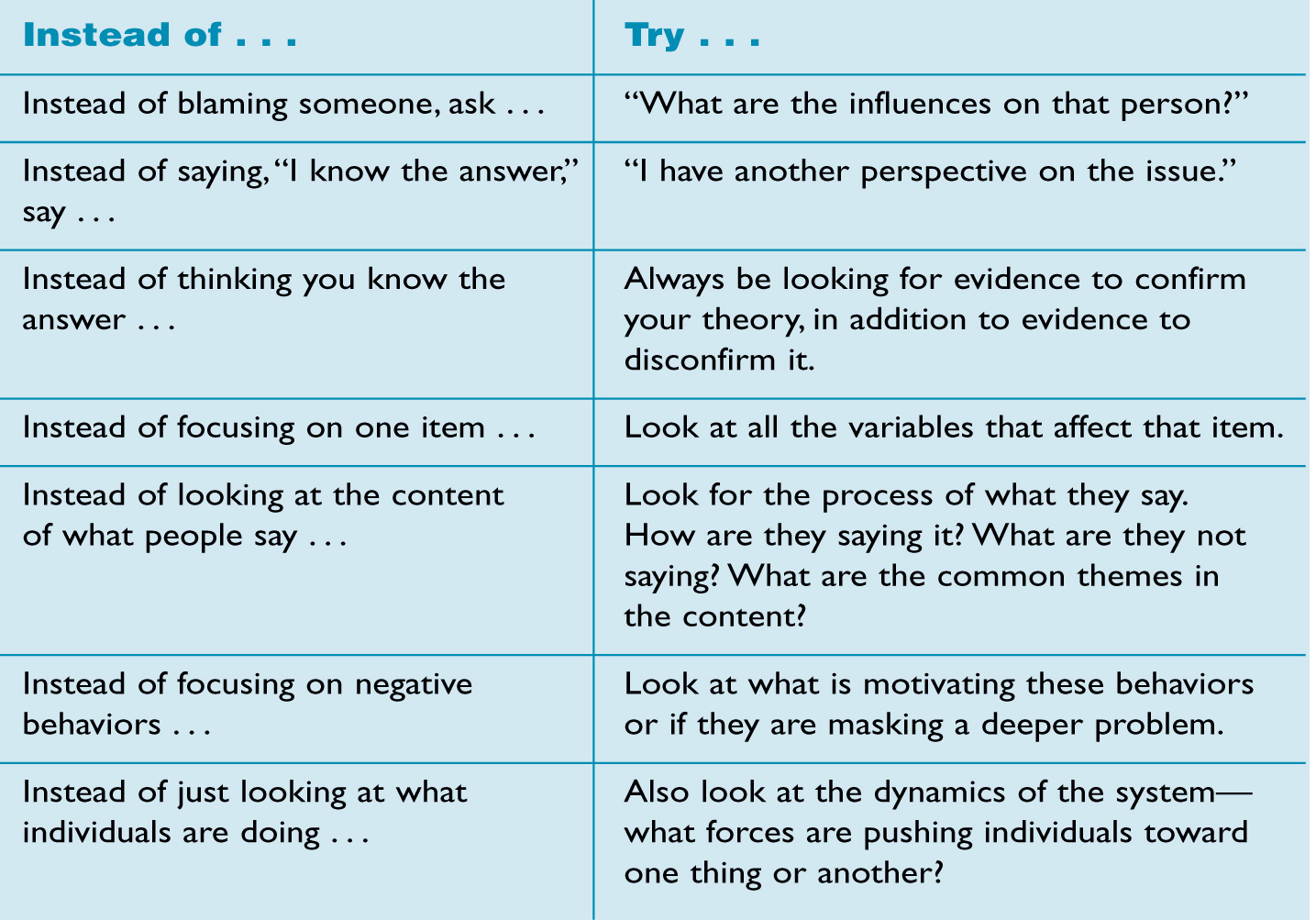 Is It a Problem or a Symptom?

One way to start to shift from linear to systems thinking is to practice identifying whether something is the problem or merely a symptom of something deeper. Linear thinking tends to focus on addressing surface-level behaviors – or symptoms. Unfortunately, making a symptom go away won’t solve the problem. In fact, it may make things worse and cause effects in other parts of the organization. A manager taking a systems thinking approach will work to understand the underlying problem before addressing any of the symptoms. Usually, if the true problem is solved, the symptoms will be eliminated as well.

How do you know if you’re seeing the real, underlying problem or simply a symptom of something deeper? Below are eight clues that what you are experiencing is an indicator of a larger problem rather than the problem itself:

Is the problem too small in comparison to the time and energy it is taking? If people are spending all their time, for example, complaining about the color of the carpet or the shape of their offices, you can assume that their reaction is a symptom of another problem.

The ten statements below are usually evidence of linear thinking and, thus, enemies of systems thinking. Hearing them is not always a sure-fire guarantee that linear thinking is coming, but they should set off warning bells.

Systems thinking is easy for some and difficult for others. Some people intuitively think in systems terms and have done so their entire lives. However, most people today think in linear, reductionistic, and mechanistic terms.

At first when people start thinking in systems, they can find things to be a bit chaotic. They become overwhelmed by the number of variables and think, “How can I do anything if I don’t know what effect my intervention will have?” This kind of thinking is normal and usually gives way to a sense of deeper insight as an individual begins to learn various principles of systems behavior. We hope the ideas in this article offer a first step toward that kind of understanding.

Jim Ollhoff (jim@ollhoff.com) is a college professor, with an academic background that includes training in education, family studies, developmental psychology, social psychology, and systems theory. His academic interests are the process of discovery in anxious systems, effective management from a complexity perspective, leadership, strategy, and adult learning. Jim teaches courses in the areas of family studies and in management.

Michael Walcheski is the chair of the Department of Family Studies at Concordia University, St. Paul, Minnesota. He has a PhD in Marriage and Family Therapy and is a licensed marriage and family therapist.