In a causal loop diagram of a systemic issue, variables are connected in cause-and-effect relationships. But often the implicit thought processes behind those links are not well understood. How does a change in a teacher’s expectations affect a student’s performance? How does a change in the amount of money available for new product investment affect the flow of new products? Exploring the mental models behind such links helps us become clearer about the mechanisms that produce the observed behavior and can lead to better solutions.

Adding thought processes explicitly to causal loop diagrams is one of a series of steps we call Going Deeper™. By mapping mental models onto a diagram, we can begin the process of exploring the more subtle aspects of the system.

The Steps of the Process 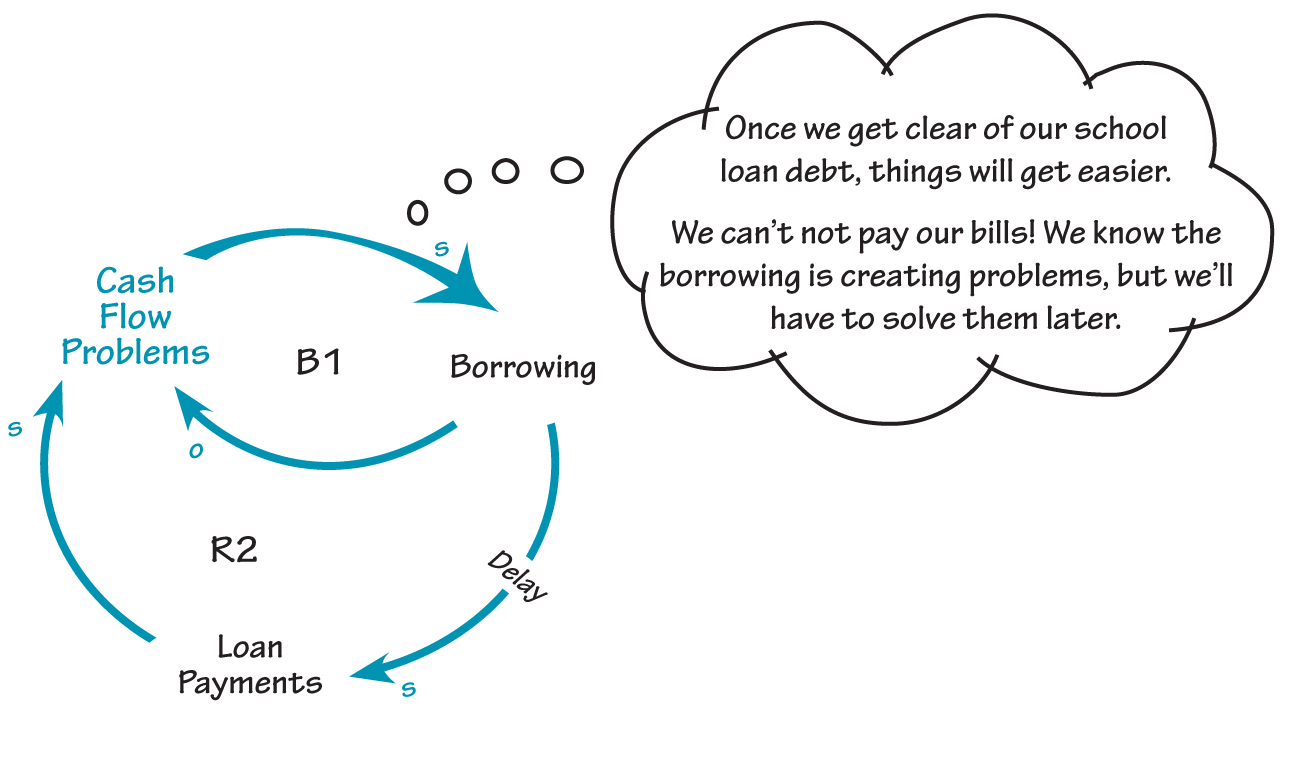 A young couple facing cash shortages finds themselves forced to borrow from their credit cards (B1). However, the high loan payments on the accumulated debt push them into deeper cash flow problems, forcing them to borrow still more (R2).

Going Deeper begins with a causal loop diagram of a systemic issue. Once the diagram is finished, the first step is to look for the links that represent human choice (as opposed to those that represent hard physical mechanisms). For example, if we have a link that says a change in revenues affects profits, we’re dealing with arithmetic laws. But a link between change in revenues and investments in R&D represents a process that involves quite a bit of human choice.

To see how the process works, let’s look at the story of a young couple, Joan and Bob, who find themselves forced to borrow from their credit cards to get through a sequence of cash shortages. Unfortunately, the high interest and payments on their accumulated debt eventually pushes them into deeper cash flow problems, forcing them to borrow even more to stay afloat.

The whole purpose of the Going Deeper process is to give visibility to non-obvious reasons why the system is functioning the way it is. If we leap to simple conclusions (, “they should know better than to build up credit card debt”) or blame systemic problems on individuals (, “they’re just not being responsible”), we may miss the larger learning that could come from a deeper analysis, and the ability to take that learning and apply it to other situations.

In another setting, a manager in charge of a new release for a well-established software product envisioned a tidy package with some specific functionality. The plan was to develop it within a short time frame, using a small development team. In September, when they began the project, the release was scheduled to ship in March, but it was delayed to July when a few more features seemed necessary. In November, it was delayed again to add even more features. In December, the release was again rescheduled—a full 12 months later than originally planned! In a software development project where the number of features added to the product extends the development time and the delivery date (R3), we may want to use a thought bubble to explore why a delay results in more features being added.

If we want to go deeper into the thought processes involved, we would put a thought bubble between “Projected Delivery Date” and “No. of Features,” so we can explore why features are being added. One possibility may be that marketing thinks that the longer the wait, the higher the customers’ expectations (, “They won’t think it was worth the wait. We’ll look like turkeys!”). From the developers’ perspective, the delay may be seen as an opportunity to experiment and add new features (, “Now I have the time to put in that new XYZ feature I’ve always wanted to design.”).

Sometimes the process of filling in the thought bubbles leads to additional variables that might be included in the diagram. For example, we might hypothesize that the longer the decision remains open, the more bugs are discovered in the current release, and the more opportunities are identified for future improvements (another reinforcing loop). By continuing to dig deeper into the thinking process, we may unearth systemic interconnections that were not obvious upon initial inspection of the problem.

From Understanding to Action

In dealing with complex situations, we want more than just understanding—we want to design effective actions. Examining our mental models and achieving deeper insights can propel a team toward action in a way that doesn’t happen if you stop after drawing a causal loop diagram. By using both the systems thinking and mental model framework to explore a problem, we can more effectively move from superficial understanding to deeper understanding, thereby liberating action.

Richard Karash has been teaching systems thinking and the disciplines of organizational learning since 1991. He was a senior staff member at Innovation Associates, a founding trustee of the Society for Organizational Learning, a founding member of the SoL Coaching Community of Practice, and co-creator of “Coaching from a Systems Perspective.” He teaches in leadership programs, trains professionals, and does executive coaching.